The web pages are indexed and it helps in getting the Search Engine Page Ranks (SERP) for every page. The page ranks help in promoting the web pages in the search engines that make it visible on the higher pages.

The various useful features of Search Engine Optimization (SEO) provided by Google helps the websites to get the much-needed recognition in the world of internet marketing by offering higher page ranks to the web pages.

What is the nofollow link attributes in SEO?

The Nofollow is the HTML tag without any link and make use of the attribute rel=”nofollow”. The nofollow tag is used with links that are ignored by the search engines.

The nofollow links don’t have any impact on the search engine because these links don’t trigger the page rank of a web page. The link is not used either for crawling or indexing. The use and the purpose of the page ranks are to drive the traffic and to help SEO indirectly.

The nofollow attribute is actively used while promoting web pages in the search engine for the past 14 years. Google on September 10th, 2019, had announced that the nofollow attribute would get two more similar elements such as the sponsored attribute and the UGC (user-generated content) attribute.

The nofollow attribute is defined as:

The nofollow attribute is useful in highlighting the link to Google which cannot parse the Pagerank and the destination URL will not be influenced.

What is the need for two more attributes when the nofollow attribute was working perfectly well? The two new attributes – sponsored and the UGC attributes introduced by Google will not allow the links to parse the PageRanks but will offer a hint to Google regarding usage of link and its intent.

The changes in the nofollow links that Google has introduced regarding its usage and influence on the search engine is in the form of two additional attributes – sponsored attribute and the UGC attributes which are used for handling the links.

The nofollow links were introduced first in the year 2005, and it has been found in many prominent areas that are far more influential than blogs, spam, etc.

But the Nofollow links have become unreliable due to the factors given below:

Are you Looking for the Best Laravel hosting, I have written a detailed article on the same

What do you mean by Sponsored Link Attribute?

The sponsored link attribute is mainly used to make the advertisements. The attribute added to the link as sponsored is a definite label and indicates its purpose of endorsement to the webmaster. It comes under the category of trustworthy links.

How to add a sponsored link?

What do you mean by UGC Attribute (How to Add?)

The UGC (user-generated content) attribute indicates that the link remains within the user-generated-content. It can be used as a user message on a forum post or a user-comment. The webmaster signifies the UGC attribute does not endorse a link but treats it as a user-generated link.

How to add a UGC attribute?

To add UGC attribute, make use of the attribute rel = ‘ugc’ for the user-generated content related link.

Why Not Just Stick With the Nofollow Attribute?

The nofollow attribute works perfectly well from the day it was introduced. The link works effectively when it is used along with the search engine. The link is useful in extending the attribute nofollow.

The attribute neither crawls into the search engine nor does it allow indexing. The nofollow links don’t influence the page rank in Google. The linking architecture is improved with the help of two useful attributes.

The new attributes are also useful in assisting Google while analyzing the anchor text which about destination content. The attributes sponsored and UGC are introduced in 2019 and have helped the site owners in getting higher ranks in the search engine and protects them from working against illegal activities.

How do the Nofollow, Sponsored, & UGC Updates Affect Webmasters or Impact SEO?

The links nofollow, sponsored and UGC are highly useful links, and each of the links has its functionality. These updates of the links are definitely useful and help webmasters in managing the websites using search engine optimization. 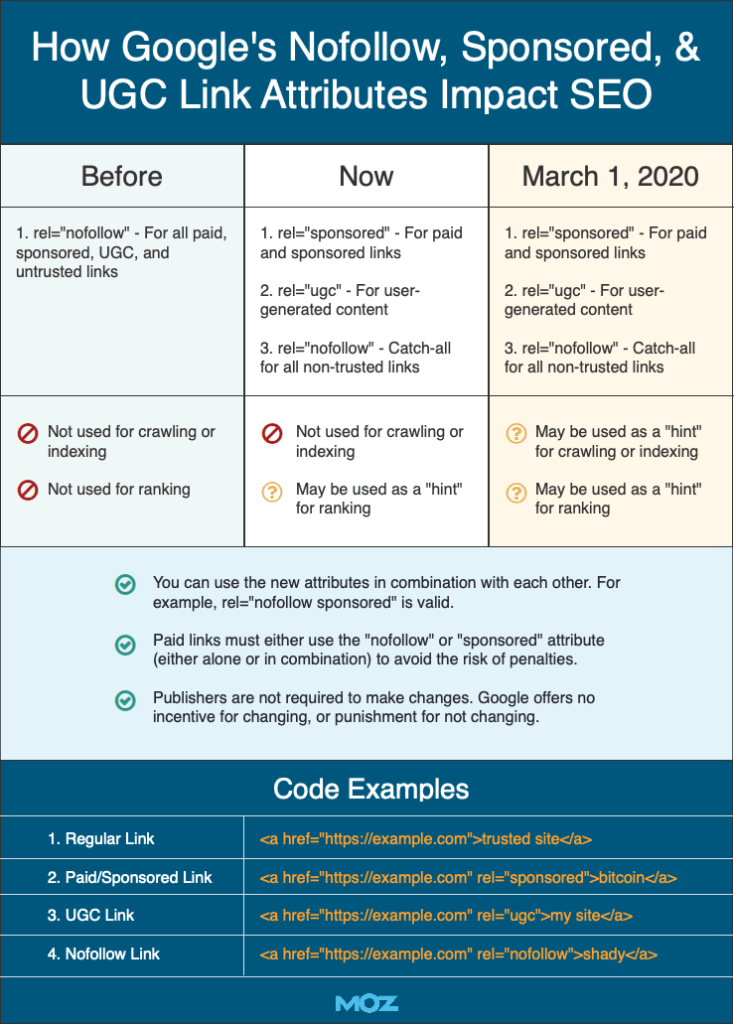 Nofollow link is specially designed to extend the attributes without having any impact on the Google search engine. The links are not allowed for any form of endorsement.

There are some activities relating to the links are taken place which is not legal at all.

Let us find out some of the useful factors which can help webmasters to handle the newly introduced attributes effectively:

The attributes should be used according to relevance. The attribute rel can be defined as given below:

For the paid links the attributes used can be used in the following given form.

It is not required to have markup changes when the nofollow attribute is used on either advertisement or the sponsored links. But Google always allows switching the elements of future link as per the convenience.

The aspects of the Google search engine and the well-defined procedures are useful in supervising the websites, web pages, and the content offered in web pages. The SEO techniques help in finding the usefulness of the websites and also to check the validity of various factors such as attributes, tags, links, uniqueness of the content, and the website.

The links such as nofollow, sponsored, and the UGC help in using the links properly without having any doubt or misunderstanding. The links are useful while designing the websites and managing the content.

The webmasters find the added attributes highly useful and it also helps in keeping the websites according to the Google requirement and effectively promoting in the Google search engine.

Managed VPS vs Unmanaged VPS: Which is Best for your Business?