That is the story of a soldier or a policeman for you in India.

Do you feel guilty for yourself for not knowing this great soul and many like him? But you are not alone and neither fully responsible for this. The major source of information in past was our print and mainstream media which we all know as Paid media or presstitutes. Presstitutes are the Journalists who have sold their soul to ideologists, politicians and business houses dressed in devil’s dress for sake of some money.

Our media is the one who gives face to anyone around the world whether good or bad.

Unfortunately it ruled for decades but with the rise of social media, these sold souls have been undressed naked into the streets of India.

One can easily observe the situation in Kashmir were a terrorist named Burhan Wani was tagged as Bhagat Singh by our renowned sold journalist Rajdeep Sardesai, who was thrashed by NRIs outside the Madison Square Garden in New York.

When Bhagat Singh was hanged, how did the British newspapers describe him: as a ‘poster boy’? #BurhanWani

Another Krantikari lady is Barkha Dutt, she was involved as a mediator in 2G scam and came into limelight in the Nira radia tape case. Her heart goes out for every terrorist, anti-national, anti-hindu and pro-Pakistani or just pro Islamic person.

The Bangalore Mirror called Burhan Wani as young leader while Times of India called a terrorist as Rebel. These all facts clearly illustrates the anti-national face our sold media.
When a mob pelt stones at you, when terrorist bombard on your station, our sold media expects you to calmly tolerate the stones and just die to maintain peace with the peace loving community. 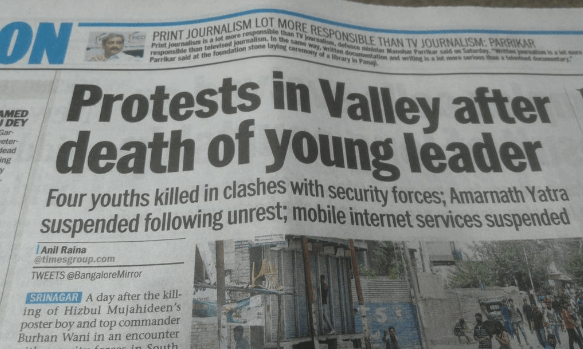 It is high time to stop these people and boycott them so that they learn a good lesson from these incidents.

Rahul kanwal gives an absurd logic that terrorism in Kashmir is the result of poor economy. If we implement the same logic to the 190 million Indians who live under poverty, then India would have 190 million terrorists. While comrade Kavita Krishnan is openly criticizing the Indian army,

Lack of economic opportunity & no hope of a better future is creating generation of young Kashmiris who are acutely frustrated & very angry.

Shekhar Gupta is much concerned about the Kashmiris who have been injured by pellets. Their outrage is such as if Indian army has fired gun pellets on innocent Kashmiris who were showering flowers.

Some genius in North Blk thought pellet guns are a great non-lethal instrument of crowd control. Shd be taken on a tour of Kashmir hospitals

No secular certified Media house, politician, intellectual and human right activist questioned the stone and grenade throwers. None of them visited the home of martyred soldiers or visited the injured soldiers in hospital. It clearly looks that the situation of our army men are even worse than terrorists.

It is important here to expose these anti nationals and not to expect respect from them for our soldiers. It is our responsibility to stand with our army and to cherish their success and mourn in their loss and only then we can unite to fight evil. Jai Hind!

Disclaimer
This Article is written by Mrigank Misra for Blogger Freak by using his Freedom of Expression and Speech.

5 Life goals is wiser to have an insurance coverage