As I was going through Twitter in Morning , I saw a Tweet from Kanhaiya Kumar accusing that Some Co Passenger tried to strangled him on Jet Airways Flight.

First you have to Understand the Meaning of Word Strangled “to choke to death by compressing the throat with something (as a hand or rope)”  So If he is accusing such attempt on him then it is very very serious accusation. 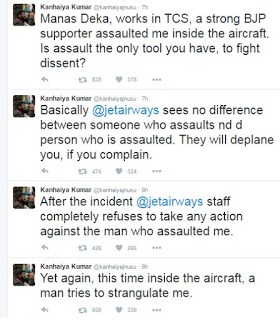 So Here Kanhaiya Kumar accused his Co Passenger Manas Deka Employee of TCS and a Taxpayer of this country that he tried to strangled (i.e Killed) in the Jet Plane in front of 200 Peoples. No one in the country will believe that Someone in the flight , in Broad Daylight will Strangled Kanhaiya Kumar

Most Interesting thing happens with this incident that the so called top Journalist, once again got exposed themselves with their Lies and after this anyone calls Journalist a #Presstitute then they will start crying

So Let’s See What was the Reaction of our Top Media Personalities.

What has come over us as a society ?? And why have attacker and attacked been deplaned & clubbed together https://t.co/mkP6eXDzo0

It is the View Expressed by India’s Top Journalist and Padma Shree Awardee Barkha Dutt , She himself calls a Journalist but she doesn’t tried to know the fact or she doesn’t bother to bring the other side story.

Here is the View of Nikhil Wagle : Nikhil Wagle is Famous for his Hatred towards Narendra Modi ,BJP and Hindus.

Cowardly attack on @kanhaiyajnusu on flight. Attacker detained. This shows how BJP n their friends afraid of him!

With this tweet you can easily understand, without any proof  How he is lying openly , Anyone who hates Narendra Modi is the Lover Boy of Nikhil Wagle. I just waiting for a day when He will Blame RSS and BJP for his birth.

While Some Presstitutes and A Supreme Court Lawyer started spreading a Lie that so called attacker Manas Deka was a BJP Committee Member. But you know about the Social Media Power the lie of #Presstitutes are busted in a Second.
READ  Arvind Kejriwal Is a Political Vulture or Twitter Troll?

Why does the last name on this list look familiar? Is he the same man who attacked @kanhaiyajnusu https://t.co/Rzp2a09OAp

He is a Supreme Court Lawyer and He thinks the Person who assaulted Kanhaiya Kumar is a BJP committee member. I have only one Suggestion before lying get your facts correctly.

From Below News on Hindustan Times It Seems Kanhaiya Kumar was Lying , Seeking Attention and Coverage. 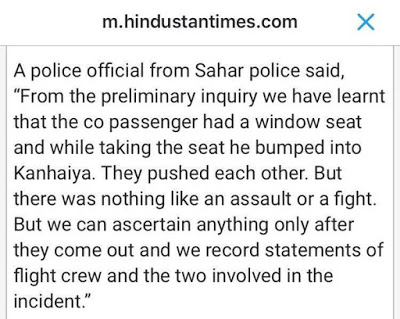 Some while ago there was a Video of Yatra where Kanhaiya Kumar was shown as demanding Azadi to Get a Windows Seats in Flight , It seems Kanhaiya Kumar has taken that Video Seriously.

So Now Let’s See the Mumbai Police Version on this Incident.

Whatever has been alleged by his (Kanhaiya Kumar) friend, in our inquiry we’ve found it not to be true: Deven Bharti pic.twitter.com/z2A1HxWAbm

How to Select Car Insurance Policy – Key factors and Riders